From the Cross to the Throne 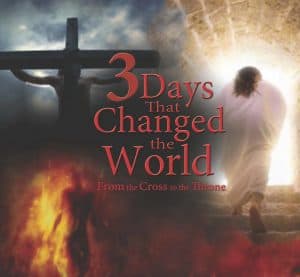 Romans 10:9-10 is the cornerstone Scripture for evangelicals in leading people to Jesus. While this is an incredible place to give clear cut steps for a concise process, this Scripture contains much more than a formula to be born again. It is, in fact, the cornerstone Scripture for appropriating every aspect of the promises of God! It says: If you confess with your mouth the Lord Jesus and believe in your heart that God has raised Him from the dead, you will be saved. For with the heart one believes unto righteousness, and with the mouth confession is made unto salvation.

Every aspect of salvation, i.e., saved, healed, blessed, prospered, protected, made whole, sanctified, and more comes to us through this process of believing that God raised Jesus from the dead. All of these attributes of salvation exist in a certain state of being: righteousness. Thayer’s Lexicon defines righteousness as “the state of him who is such as he ought to be.” God created man to be healthy, happy, prosperous, peaceful, and every other imaginable enjoyable state. In the Garden of Eden man was as he should be and in Heaven man will be as he should be.

We’ve made righteousness a goal instead of a state of being and as such we lock ourselves into a legalistic mindset. A goal is obtained by accomplishment or labor. A state of being already exists and is entered into by belief. Righteousness, like the Kingdom of God, already exists; we don’t have to create it, it’s something that we enter into internally. It’s strictly a heart issue.

We can create carnal substitutes for any of the states of being that God offers. We can have circumstantial peace, but circumstantial peace only lasts as long as all external circumstances support it. We can have a joy or happiness based on obtaining the things we desire but, once again, this is subject to the actions of others. We can only maintain it as long as the world around us gives us what we want. Jesus offers us a joy that’s independent of circumstances and He offers a peace that’s beyond anything that makes sense.

Likewise, the appearance of righteousness can be manufactured, but as Jesus told the Pharisees, You are like whitewashed tombs which indeed appear beautiful outwardly, but inside are full of dead men’s bones and all uncleanness. Even so you also outwardly appear righteous to men, but inside you are full of hypocrisy and lawlessness. (Matt. 23:27-28) God looks on the heart. Everything God desires to do in you, He desires to do in and through your heart.

The beginning of our walk with Jesus as Lord, as well as every step we take from that point forward, should revolve around what we believe in our heart about Jesus’ resurrection from the dead. We only have in salvation what Jesus accomplished through the resurrection! There’s no other place to look and there’s no other process.

In Eph. 1:16-23 Paul prayed for the church that …the Father of glory may give to you the spirit of wisdom and revelation in the knowledge of Him, the eyes of your understanding being enlightened… For the remaining verses of this chapter he points out that the power that works in us is the same power that raised Jesus from the dead. What we have, we have because He obtained it in the resurrection. We partake in it because we are in Him!

The most essential aspects of our faith revolved around three questions: 1) what did Jesus conquer and obtain through the resurrection? 2) Am I in Him? 3) Do I believe that being in Him qualifies me to share in these benefits? If we live by resurrection power we must know what Jesus accomplished through the resurrection. This is where Rom. 10:9-10 come into play in every faith equation!

In Isaiah 53 we see much of what Jesus endured from the cross to the throne. But the prophet begins that chapter by asking, “Who has believed our report?” Very little of the biblical report of the death, burial, and resurrection is believed by the church. This religious blindness is the primary result for the spiritual impotence of most believers and the church’s failure in the world.

We believe the historical account of the life of Jesus but deny most of the biblical account of His death and resurrection. When Jesus said “It is finished” most people believe the work of salvation was completed. But in actuality, the true work of salvation had hardly begun. Kittle’s Theological Dictionary of the New Testament may be the foremost authority in New Testament Greek. Listen to Kittle’s definition of this Greek word: This verb means “to carry out, to execute, to fulfill, to carry out instructions, to bring to an end, to fulfill obligations.” Jesus had fulfilled or carried out all of God’s directives in His earthly life. All of the prophecies had been fulfilled.

What started on the cross (Jesus becoming our sin) had its ultimate fulfillment in Jesus taking all the curse of the law we deserved. This didn’t end with physical death. The debt was not paid until He was alienated from God in the abode of the wicked dead. He was held in the grave by our sins and by the curse of the law, alienated from God. But Jesus believed God’s promise to Him. The book of Jonah and many of the Psalms graphically portray His struggle of faith.

Our faith isn’t rooted in the historical Jesus; it’s in the resurrected Lord. We believe in our heart that God raised Him from the dead after having become our sin and taking the curse that we deserved. But He used His faith to conquer all of that. The last catch to this scenario is that we have to believe in our heart! This isn’t a mere intellectual acknowledgement of the facts; it must become a heart belief.

There are many aspects of believing in our heart but the primary indicator is found in the fact that what we believe in our heart is the core of our identity, who and how we see ourselves. If I believe in my heart that Jesus is raised up over sin, death, Hell, and the devil, I believe that I, too, am raised up. If I believe in my heart that through the resurrection Jesus obtained an inheritance, I believe that I, too, have obtained an inheritance. This is the heart of Paul’s prayer in Ephesians. The revelation missing from the church today is the in Him realities that come through faith in the resurrected Lord.

(This article is based on the eight-part series entitled, Three Days that Changed the World.)

About Dr. James B. Richards

Jim Richards currently holds an earned Ph.D., Th.D. and O.M.D. He received an honorary “Doctor of World Evangelism” for outreach and ministry in the Philippines. He has over 40 years of successful ministry experience that includes crusades, and pioneering churches in America and around the world; as a best-selling author he has published dozens of books, booklets, workbooks and ministry development programs that are distributed world wide; He has conducted international leadership conferences and has pastored a successful local church in Huntsville, AL.

He holds certifications in many areas of human development and is a State recognized & certified, addictions counsellor. To stay in touch with the needs of the world, he continually seeks training and experience in a wide range of fields including alternative medicine, human behaviour and other practical areas, all of which are applied to becoming a more effective believer and minister who is reaching and helping humanity.