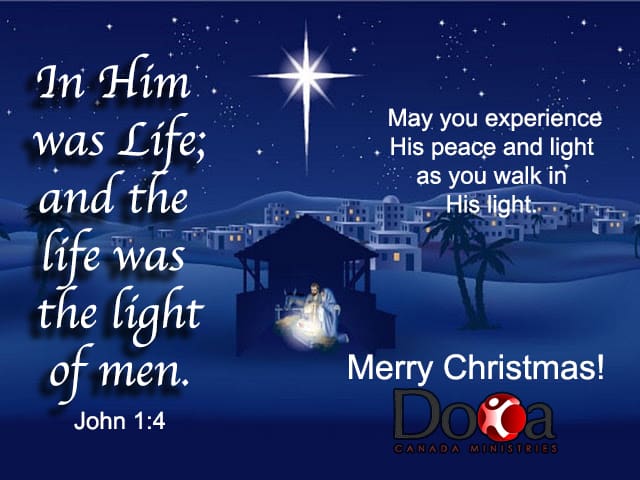 … 9The true light that gives light to every man was coming into the world. 10He was in the world, and though the world was made through him, the world did not recognize him. 11He came to that which was his own, but his own did not receive him. 12Yet to all who receive him, to those who believed in his name, he gave the right to become children of God–13children born not of natural descent, nor of human decision or a husband’s will, but born of God. 14The Word became flesh and made his dwelling among us. We have seen his glory, the glory of the One and Only, who came from the Father, full of grace and truth.
… 18No one has ever seen God, but God the One and Only, who is at the Father’s side, has made him known.”
John 1:1-5,9-14,18 (NIV)

What wonderful news! God became a human being in the man Jesus just like us in every way but sin, not only to save us, but to walk among us in order to show us who God truely is. Up until then men tried to understand and interpret God from His law and actions, but always from our perspective, which is limited and faulty. We just never got Him. We never knew His heart, His motives, His character or His logic and understanding that went into every word and action He made toward us.  Jesus Christ, the Word, knew God personally and intimately, because He is a member of the Godhead, the Son.  He understood God’s heart, motives, character, logic and understanding in every word and action He said and did. In becoming a human being the Apostle Paul tells us that Jesus,

“Who, although being essentially one with God and in the form of God [possessing the fullness of the attributes which make God God], did not think this equality with God was a thing to be eagerly grasped or retained. But stripped Himself [of all privileges and rightful dignity], so as to assume the guise of a servant (slave), in that He became like men and was born a human being. And after he had appeared in human form, He abased and humbled Himself [still further] and carried His obedience to the extreme death, even the death of the cross!” Philippians 2:6-8

Jesus walked this planet as a human being and demonstrated to us who God is, what He is like. How Jesus treated people, what He taught, and in the way He lived and how He died and resurrected we can see the true character, motives, logic, understanding and heart of God who loves us dearly.  You want to know Who God is and what He is like, look at Jesus. He is the exact representation of God living as a human being, fully connected to God, completely yielded to the Holy Spirit in walking out the character, motives, and heart of God toward other human beings. We can see what God has made us to be, what is possible for us, who believe and are born of God, fully yielded to the Holy Spirit, God’s gift to us in Jesus.

Thank you, Father, for coming up with this plan from the very beginning.  Thank you, Jesus, the One and Only Son, for yielding to this plan to make it a reality and to be the Life and Light to us. And thank you, Holy Spirit, for coming alongside to lead and guide us from our hearts in the Light to the Life.

And it all began in the story of Christmas…

Merry Christmas to you and yours,

Ted van Diepen and his wife Bev are co-founders of Doxa Canada Ministries. He is a graduate of Impact International School of Ministry with a Bachelor’s Degree in Theology.
Ted and Bev live in Edmonton, Alberta, Canada.