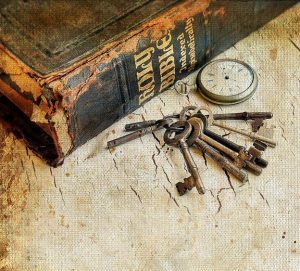 God planted Himself in you when you were saved and filled with the Holy Spirit. Now He’s saying, “Learn to turn Me loose!” You need to go practice. This is how you learn. Everybody practices things before they become proficient in them.

Pilots had to practice. Before they were allowed to fly an airplane by themselves, they had to put in time learning how. They had good landings and bad landings. Perhaps they even scared the you-know-what out of their flight instructors. Eventually, they got to fly on their own.

What about doctors? They practice medicine. If someone goes to their office they practice on them saying, “Take this pill. If it doesn’t work, come back. We’ll give you another one.” This is practicing! In fact, doctors don’t quit if you die. They just keep right on practicing. They are so bold that they even put it out on their signs, “Family Medical Practice.”

“Doctors bury their mistakes.” That’s how my dear old dad felt about it. He lived to be over one hundred years old. He said, “No doctor is ever going to cut on me!” God backed him up. No doctor ever cut on that man. He was a tough old Swede. After Mom went to Heaven Dad married a second time at age eighty one. He lived with that woman for nineteen years!

Lawyers practice law. They profit both ways–win or lose, they still get their money! Do they quit if they lose a case for you? No! They keep right on practicing. Only Christians quit. “Well, I prayed for a guy and he died.” Big deal! Keep on practicing. Who’s doing the healing anyway? You and I couldn’t heal the wing on a fly, but we carry Someone on the inside of us who can raise the dead and cure every kind of disease! You grow as you go!

How are you ever going to release Him if you never get out there and lay your hands on a sick person and expect healing to happen? The first four people I ever prayed for who had cancer all died. I knew it wasn’t God’s fault so I didn’t get discouraged; I just kept on practicing!

I went to the hospital to empty it. I started on the top floor and worked my way down; however, nobody followed me out. So I sat down in the waiting room and asked, “God, what’s going on in here?” He answered with a question of His own. “Hey Dave, who’s doing the healing?” “Not me!” “You got that right!” Then He added, “Can you take any credit if someone gets healed?” “Nope.” “Then neither can you take any credit if they don’t get healed.” Wow, that set me free! My job is to lay hands in faith, His is to heal.

What keeps you from laying your hands on the sick? “Well, what if they don’t get healed?” That’s none of your business, you just go lay hands on them! Use the faith that God has given you, release His power, and expect healing to happen.

Reflecting on what He had just revealed to me I told the Lord, “If I pray for one guy and he drops dead I’ll just step over him and pray for the next one.” “That’s exactly what I want you to do!”

This is why I act like I do. I’m a free man! I just went out and started laying my hands on everything that moved and didn’t move. That’s why I minister strongly in healing and miracles today. Keep after it! Today I can tell you about thousands of miracles from over three decades of ministry. Thank You, Jesus!

One time I went into a hospital and sneaked into a room where a little guy was dying of cancer. At two years old they had opened him up and discovered he was loaded with it. I grabbed his big toe and prayed in tongues. Then I left. The next day he was totally healed! I saw that baby not too long ago and he is now a grown man! Glory to God!

I can tell you all kinds of stories like that. Knowing God. He is worth it! Leading people to Jesus. That’s knowing Him! Letting Him work through you. Thank You, Jesus!

God spoke to me one day saying, “I am with you.” As you are stepping out in faith to minister to people, know that He is with you. Most people think when a problem comes their way that either God has left them or they need to convince Him to do something. At the Cross and the Resurrection He did everything that ever needed to be done. When you know something is God’s will because you have read the Book, go ahead and do it. He is with you whether you feel Him or not, whether you get a holy goose bump or not!

I’ve seen my greatest miracles when I didn’t even feel like it. I didn’t get anything specific in my heart. I felt like I was standing there all by myself and then God showed up! Those are the times your mouth drops wide open and you get lockjaw. Those are the times when you really get to know that you are traveling with awesome power. He teaches you as you go. How can you top instruction from the mighty Holy Spirit? Youâ€™ve been built to succeed!

God did this to His people in the Old Testament all of the time. They were set up for miracles! Think about Moses. The Lord led him by a pillar of fire by night and a cloud by day. There was no mistaking the leading of the Lord. Where did God take him? Straight to the edge of the raging Red Sea! Moses and the people had no place to go. That cloud of dust on the horizon meant Pharaoh had reconsidered and was now chasing them down with a vengeance. Then the Israelites started grumbling, “Moses, you stupid guide. You took us out here to die!” Even Moses began having a fit. He had to look up. There was no other direction to look but to GOD!

“Moses, what have I put in your hand? Pick it up.”

Moses was probably more shocked than the Bible reveals when he put his staff down into the water and it parted. Most movies show about fifty feet or so of water parting. No! The water flat out disappeared! In fact, the water actually divided to roughly thirty five miles wide. Moses had no idea where the water went. He just said, “Well, now is as good a time as any to get across. Go!” I can see Moses saying, “Thank You, God!” The Lord led Moses into that situation. God set him up!

Have you heard that song or that saying, “Whatever will be, will be”? What a lie! “Que sera, sera.” Not! God’s powerful Word and the mighty Holy Spirit change things. Your life story is about to be changed. Believe it! Expect it! God works miracles today!

You could choose to continue moaning and groaning about all of your problems, but I have news for you: you won’t receive your miracle from God that way! Be bold. Speak His Word to your problem. Command the change. Sing your praise to the Lord. Thank Him for what He has promised to do through His Word even before you see it manifest with your eyes or feel it with your senses.

In fact, things often get worse before they get better. Don’t be surprised or discouraged. This is just the devil trying to get you to back down off your faith in God. Through doubt and unbelief he wants you to cut off God’s miracle-working power that is flowing into and through your life. If things do get worse stand firm upon His promises in faith. Keep thinking, acting, and speaking in alignment with what His Word says about your situation. It has to turn! God’s Word works. Keep practicing!

See your miracle being done through the eyes of your heart! See your body healed and made whole. See yourself paying your bills and getting out of debt. See yourself ministering to others in His power and love. This is your inheritance. You don’t have to beg God for it. He already spilled His own Son’s blood for you to have access to it. Believe and take it! Glory to Jesus!

Many Christians have been taught to beg God. They think He says, “Well, I heal one out of three.” No! Jesus healed them all. It is God’s will that you be healed. If there is no one who will lay hands on you, lay hands on yourself. You’re a believer. The Bible doesn’t say it has to be someone else’s hands. Practice on yourself!

God is a miracle-working God! Keep on practicing. Believe and receive your miracle. Be the channel He brings other people their miracles through. Knowing God–what a life! Hallelujah!

This article is an excerpt from Dave Duell’s book, “Knowing God.”

Dave electrifies audiences with his powerful messages. Hot as horseradish! A dad's dad. Compassionate, loving, and humorous, Dave represents the love of God in every aspect.